In a recent post I shared that my mother passed away in May of 2017. Her passing started a succession of sorting, finding new homes for, and sometimes discarding the objects that she had accumulated over her lifetime.

Clothing came first, then clumps of papers, then caches of other belongings. In the basement we discovered a stockpile of yearbooks, both my mother’s and my father’s. Both attended Tamaqua High School in Schuylkill County, Pennsylvania, graduating in 1943, and both attended more than one university. My mother started at the University of Michigan in Ann Arbor, Michigan, intending to major in Aeronautical Engineering. After two years, she transferred to Duke University in Durham, North Carolina, where she graduated in 1947 as an English major. My father enrolled at the University of Pittsburgh, where he started as a fullback on the 1943 football team, then transferred mid-semester to a Navy aviation cadet program at Penn State, where he started as a halfback. At Penn State, he scored two of the winning touchdowns against his former teammates in the 1943 Pitt-Penn State game.[1. Tim Panaccio, Penn State vs Pitt Beast of the East: a Game-by-Game History of America’s Greatest Football Rivalry (West Point, NY: Leisure Press, 1982), 142.] But he didn’t stay at Penn State either– he received an appointment to the U.S. Naval Academy, where he spent four years and graduated in 1948. 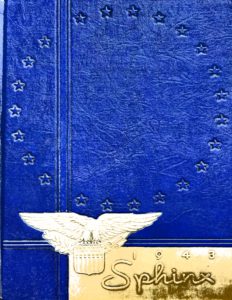 My parents’ education added up to a large collection of yearbooks (especially when you consider that the Naval Academy sends its very large yearbooks, called Lucky Bags, to midshipmen’s families, and my grandparents’ Lucky Bags were in my mother’s basement too)! But that wasn’t all. Dad spent almost thirty years as a naval officer, serving in ships, shore-based and afloat staffs, and schools. Many of these naval activities produced yearbook-like publications. Ships, in particular, frequently publish cruise books commemorating deployments to various parts of the world.

In addition to being great keepsakes, these publications are terrific sources for family history! Not only do they place family members at a particular school in a particular time frame, they tell what activities the family members took part in (thus documenting their talents and interests) and feature portrait and candid photographs. They also illustrate the size, physical layout, the social life, and the culture of the schools. Navy cruise books are similar–they typically contain formal and candid photos of officers and crew members, along with descriptions of what the ship did and where it went during the period covered by the cruise book.

Neither I nor my brother and sister nor my two children wanted to keep Mom and Dad’s physical books, but we didn’t want to put them into the dumpster, either. I accepted the task of inventorying what we had, creating digital scans of the pages where my parents appeared, and finding homes for the physical volumes.

After creating a list of the institutions and years of the books, I checked Ancestry‘s collection of school yearbooks (“U.S., School Yearbooks, 1880-2013”), to see whether it included Mom and Dad’s high school and college yearbooks. (Most of them were there, but a few were not.) Ancestry support has information on donating yearbooks for scanning and inclusion in the collection. Donated yearbooks are cut up for scanning, scanned, and discarded, so don’t send yearbooks to Ancestry that you want returned.

I found that the Ancestry and Navy Department collections included the majority of the yearbooks and cruise books I had; I donated the ones not represented in those collections, and found homes for the rest in historical and heritage societies.

Before I sent the books away, I used the Scanner Pro app on my smartphone to scan the pages where my parents appeared. While my father commanded the Navy destroyer USS Warrington (DD-843), the ship conducted an around-the-world cruise, and I scanned the pages describing the ship’s itinerary and ports of call–Dad brought back presents from the voyage, and it’s interesting to have this information on their provenance.

The inventory, the scanning, and the distribution of my parents’ yearbooks and my Dad’s cruise books was a considerable amount of work, but I was happy with the results. My family has scanned copies of the pages where my parents appear, and we also have the satisfaction of making new materials available to researchers in online and physical research collections. Perhaps best of all, the books are no longer taking up any space in our houses!

One comment on “Working with Yearbooks and Navy Cruise Books”