MyHeritage (www.myheritage.com) is an Israeli-based family history website that offers record searches, family trees, and DNA testing. The company’s strengths include participation by many genealogists from outside the U.S. and high-performance technologies for matching and search described here.

Recently MyHeritage announced the addition of Ellis Island and other New York Passenger Lists covering the period from 1820 to 1957 to its searchable collections. The announcement was picked up on the Dick Eastman and Legacy Family Tree blogs. (Click here for Eastman’s article, and here for the Legacy Family Tree article.)

The New York passenger lists have long been available at The Statue of liberty – Ellis Island Foundation website (www.libertyellisfoundation.org), Ancestry‘s “New York, Passenger lists, 1820-1957” collection, and at FamilySearch. Searching the records is free at Ellis Island Foundation and FamilySearch; Ancestry‘s collection requires a personal subscription but can also be accessed free through Ancestry Library Edition at many libraries. At MyHeritage, you can search the New York passenger list records for free, but you will need a subscription to view the extracted information and scanned images or access Record Matches.

What’s unique about the newest version of the records is that MyHeritage has indexed and made searchable information that other providers have not indexed. This includes the columns added in 1897 for the names and addresses of relatives or friends that ship passengers were joining in the U.S. and the columns added in 1907 for the name and address of the passenger’s closest relative or friend in their home country. The ability to search this information is a truly exciting development for family history researchers. It enables us to link family members, use information on associates and locations to distinguish between immigrants with similar names, and identify previously unknown family members and locations in the U.S. and overseas.

Was this Anna’s arrival record?

Clicking through to the extracted record and image revealed more information. 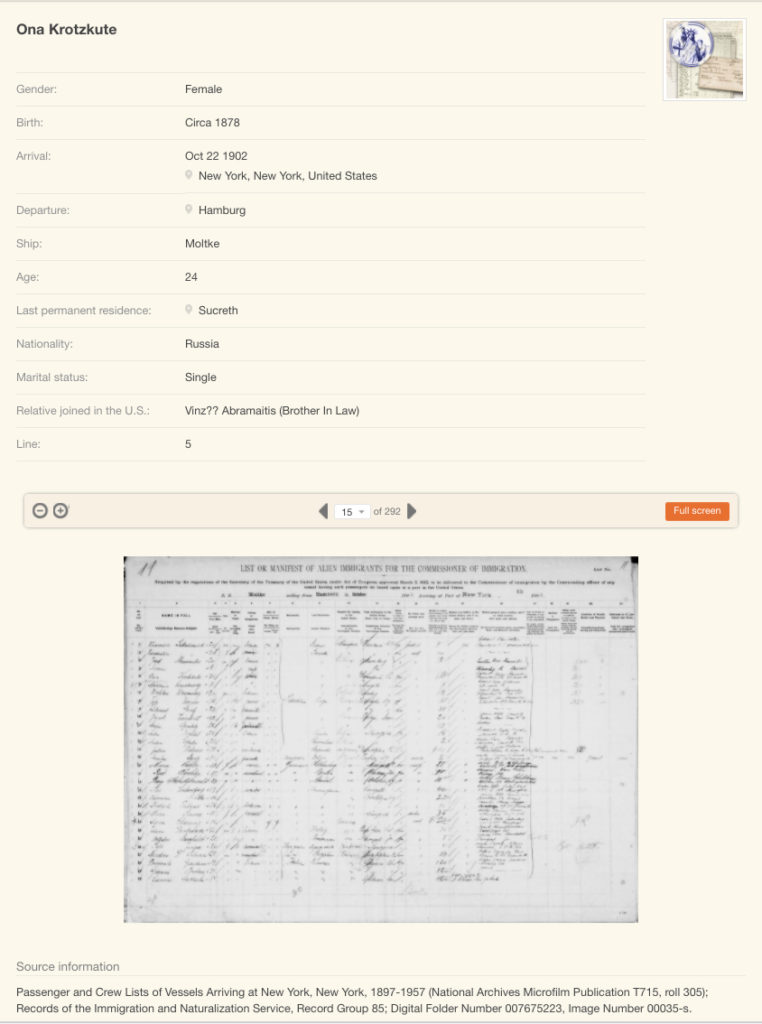 “Ona Krotzkute” arrived in New York on 22 October 1902 on the ship Moltke from Hamburg. Her last permanent residence was “Sucreth.”

Since I now knew that Anna arrived in the U.S. on a Hamburg ship, I was able to locate her emigration record in Ancestry‘s “Hamburg Passenger Lists, 1850-1934” database, and share these two records with other Kruchkas descendants.

I like the new MyHeritage database and will be using its indexing features in the future to find other missing passenger lists!