Of my husband’s eight great-grandparents, we know the origins of six and a half: two were descended from nineteenth-century Irish immigrants, three were descended from nineteenth-century German immigrants, one’s mother was the child of Scottish immigrants (father unknown), one was adopted, and one had early American ancestry, probably originating from the British isles.

The first of his ancestors to land in America was the grandfather, Thomas Emery, a native of the Emerald Isle, who, with his family, immigrated to eastern Pennsylvania about 1771. He remained there several years, and finally removing to Washington county, made his permanent home near Canonsburg. The children born to his pioneer were as follows: Joshua, Walter, Phinney, Jeremiah, Mrs. Nancy Clark and Mrs. Martha Jamison.[8. Commemorative Biographical Record of Washington County, Pennsylvania, Containing Biographical Sketches of Prominent and Representative Citizens, and of many of the Early Settled Families (Chicago: J. H. Beers & Co., 1893), 596-7; digitized book, Internet Archive (https://archive.org/details/commemorativebio00jhbe_0 : accessed 9 August 2018).]

The map below shows the respective locations of the Bethel Church and Canonsburg. 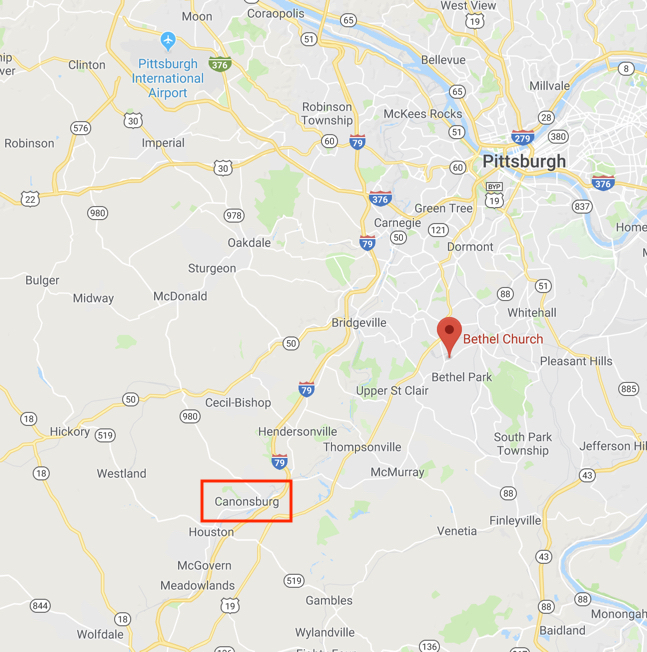 Record entries for Thomas Emery and the others mentioned in the Commemorative Biographical Record amplify the information in the Emery article. Thomas Emery’s will, dated 21 April 1824 and proved 20 August of the same year, mentions a wife Martha Emery and directs the division of Thomas’ property and money among Joshua Emery, Jeremiah Emery, Agness Clark, the children of Walter Emery, deceased, and Martha Jamison. The will was witnessed by John McMillan and Samuel McMillan.[11. Washington County, Pennsylvania, Will Book 4: 84-5, Thomas Emery; “Pennsylvania, Wills and Probate Records, 1683-1993,” digital images, Ancestry (https://www.ancestry.com/interactive/8802/005537969_00344/2007796?backurl=https://www.ancestry.com/family-tree/person/tree/48990/person/402029409461/facts#?imageId=005537969_00344 : accessed 9 August 2018). The will book imaged is typescript, thus probably a later recopying of an earlier, handwritten original will book.] It is likely that the two witnesses are the Presbyterian minister John McMillan, a neighbor of Thomas Emery, and his son Samuel. Thomas Emery purchased land on Chartiers Creek bounded by “land of the Revd John McMillan” in 1809, and John McMillan had a son named Samuel. [12. Washington County, Pennsylvania, Deed Book 1U: 648-9, John McDowell Esqr & wife to Thomas Emery, 27 August 1809; digital image, FamilySearch (https://www.familysearch.org/ark:/61903/3:1:3Q9M-CS4T-6YBK?i=357&cat=225855 : accessed 9 August 2018). For the identity of Samuel McMillan, see Dwight Raymond Guthrie, John McMillan, the Apostle of Presbyterianism in the West, 1752-1833 (Pittsburgh: University of Pittsburgh Press, 1952), 47; digitized book, University of Pittsburgh ULS Digital Collections (https://digital.library.pitt.edu/islandora/object/pitt%3A31735057894598 : accessed 8 August 2018).] The widow Martha named in the will appears to be a second wife, Mary Emery having predeceased her husband in 1819. Thomas Emery executed a bond to marry Martha Gibson in April 1821.[12. “Washington County (Pennsylvania) Marriage Bonds, 1803-1827,” p. 9, typescript of listing found in the papers of E. B. Iams, apparently copied from court records about 1940, in Citizens Library Genealogical Records, Washington County PA Births, Marriages, Deaths, 1806-1854, Fort Vance Historical Society (http://www.fortvance.org/FV_Docs/Washington_County_PA__Births_Marriages_%20and_Deaths_1806-1854.pdf : accessed 8 August 2018).]

I am pleased to welcome this Presbyterian Irish family to the roster of my husband’s ancestors!